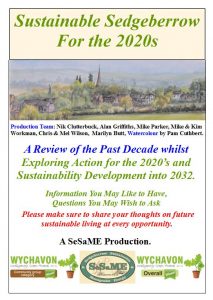 Those last five years and a vision for the future are explored in “Sustainable Sedgeberrow For the 2020s” a booklet, this time produced printed and paid for solely by SeSaME. Click on the frontispiece to read more.

We saw SeSaME provided with opportunities recorded in the booklet illustrated here: “Sedgeberrow Energy Scene” produced on our own printer; paid for by the Parish Council and delivered to every household; with much of the work undertaken supported be Wychavon DC and Actonenergy. Click on the frontispiece to read more.

Low Carbon Heating. This summer may have caught you wishing for less of what has been a very impressive heat wave. Something you’re likely to be missing, come December, particularly as it came free gratis!

If that’s the case you might have been glad to join me at a Conference    listening to Richard Vianello, a Deputy Director at the Department for Business, Energy and Industrial Strategy (BEIS), outlining the department’s strategy for the “Decarbonisation of Heat in Buildings as part of the Prime Minister’s “Clean Growth Strategy”.

The plan, amongst other objectives is to “make sure every new building in Britain  is safe, high quality,  much more  efficient  with clean heating, whilst innovating to make low energy, low carbon buildings cheaper to build.”

With existing housing stock the aim is to; “halve the cost of renovating  existing buildings to a similar standard as new buildings, increasing quality and safety”

Key deliverables quoted were; “to phase out the installation of high carbon fossil fuel heating (domestic and non-domestic) during the 2020s, starting with new build, and reduce barriers to low carbon heating deployment

The members of this OFTEC trade Association conference, oil fired heating engineers, agreed that new build housing with renewable energy      systems like air and ground source standards, could become financially  viable, but the cost of converting existing buildings to those standards was unsustainable. They would encourage the development of a low carbon  liquid fuel for existing oil fired boilers.

Living in a rural community with no Mains Gas and significantly high   carbon fuel consumption, my first thought was; “what about those 20 new houses planned some time ago for building in our village. Knowing post 2020 plans, we wouldn’t be very caring of future villagers, if we saddle them with a heating system we know could mean avoidable future costs.

A bit like continuing to build houses, with an outside privy, and a peg to hang the tin bath on, just because you don’t have to upgrade your building skills to modern needs for a couple more years. I will let you know what heating is planned for them. Watch this space!

Powered by WordPress | Copyright 2021 by SeSaME